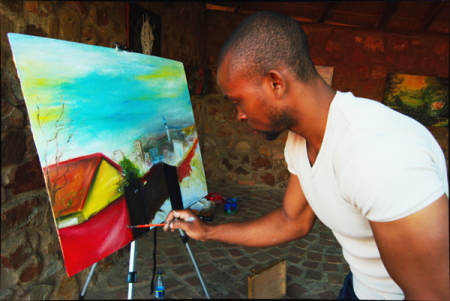 By the time I sat down with Azael for a one-on-one session I was on a high intoxicated with every kind of emotion expected of an erratic eccentric like myself. I look over at Karabo my partner in criminology, and find even in my blurred state of mind that though I could be declared whimsical he on the other hand had reached nirvana…heck he had all but eloped with Nirvana! Azael looks over at him and then back at me demurely and somewhat patiently and I wonder what thoughts are mounting up his medulla oblongata. I thank him for his time and mutter my name somewhere between planting my teeth into a ketchup and mustard soaked hotdog and licking my fingers and realise as an after-thought that I lacked a certain kind of… what do you call it?

Yeah that’s the word ‘professionalism’. I look at him shyly my eyes telling of my shame and he gives me the heads-up ‘I understand your type’ nod. The brother really doesn’t seem to be fazed by my quirky behaviour so I figure that he must hang out with gremlins at night, after all his mind has carved out the vision that I see before me. Across from where Azael and I are sitting is a life-sized creature that I fail to name and yet find to be familiar in an uncanny sort of way. I guess that is what makes it beautiful because I sit at a loss of words for a minute or two gazing at it with Azael beside me. The bear-like creature stands at a unique angle as if it’s about to mount, pounce or set off in flight but somehow got frozen in time before it could follow through. My mind escapes me and sojourns into Narnia at least that is the product of the nostalgia brewing in me as I muse over the art piece. Finally when I do collect my thoughts and thank Azael for his patience and time in allowing me to interview him he acknowledges all with a smile, and so we get talking. 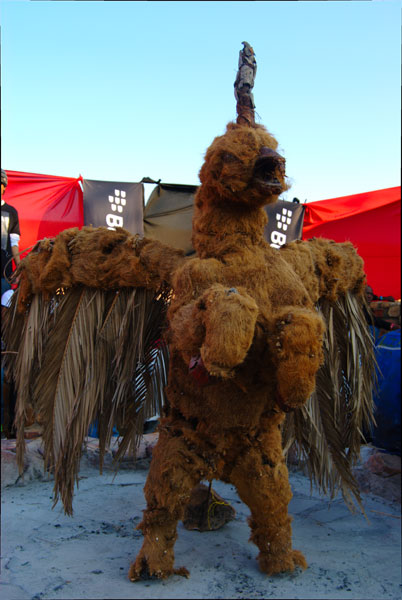 Azael who is a 2nd year art student at TUT tells me that what we are looking at is an academic project where the class was briefed on creating a creature, any creature he says. But what is the catch I ask? He smiles slightly realising that he has not revealed all and explains that the catch is that it they had to create the creature around a mythology concept. My eyes revert back to Azael’s creation and it’s as if the proverbial scales fall off my eyes faster than one can say “wow!” The artwork had been so hypnotising that I had failed to see its simple elements right in front of me. I had, for example, not noticed the unicorn standing like a phallic symbol on the mythical creature’s head. In a moment of catharsis I formulate a philosophy for art as I realise that art has a rippling effect in the eye of the mind.

So with my mind’s eye being amplified I start to notice little things about Azael’s creation that I note in my vanity are what contribute to its aesthetic whole. I mention this to Azael and he looks flattered and from his explanation I understand that the creature is a combination of what is familiar because it has familiar elements constructed together in a fantasy: the creature has a horse’s body or trunk, the legs of a goat, the wings of an eagle and Unicorn head and horn. I am mystified at how this strange thing is so strange yet beautiful and in a fleeting moment can captivate one’s imagination. I want to know more about this individual who made it because if I had met him amakhoneni I never would have guessed that his mind is a world of dreams. Azael, a humble young man from Daveyton refers to himself as a “spontaneous artist” who can never put too much thinking into the process than he does the doing.

He merely creates. As we talk some more about his background I am astounded to hear that he there are no artists hailing in Daveyton in fact he surmises that he may be the only Daveytonian who has ever studied arts. This opens up a whole new dimension in the interview. The question is posed: why is it so taboo for abodarkie to allow their children to study arts or even consider it as a profession? The question hangs between us like a dark ominous cloud and we choose to let it hang. I am taken aback to learn that Azael’s speciality is actually in painting and not in sculpting or carving or whatever the classification of this type of art on display… His versatility as an artist renders him as a walking contradiction: How can this guy so meek and so humble have such a daring imagination, such a creativity to create myths in an era where classic art has been forgotten and commercialised to a haunting extent?

Imagine my surprise when he tells me that his inspiration is life and people but more particularly the loksion where he hails from. I find it ironic how Daveyton serves as a frame of reference or drawing board for Azael to create a mythical creature. What is the marriage between a township in the 21st century with Greek society in the 17th century where various mythologies were birthed? It cannot be denied this loksion boy has got skills and by the end of our ad hoc interview he has literally transfigured with every explanation of his magnificent work. I see a splinter of a smile, a hint of charisma and charm, a prelude of personality as he explains to me how he achieved his creature: I used palm trees for the wings, peeled bark for the body, wire and re-inforcement bars…As Azael takes me deeper into his creator mind, I evaporate in a wisp of a mythical dream.