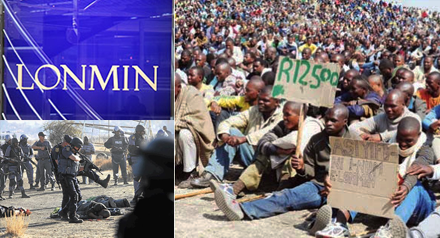 The world renowned jazzman Hugh Masikela, in the live recording of his famous working class anthem, Stimela, a song that underscores the debt South African owes to its SADC neighbours played in the building of its economy, says: “We’d like to dedicate this song to all those people who lose their lives working in cheap labour. All those people who dig fruits and vegetables in the cold wintery nights with their bare hands, all those people who die falling from sky crappers; railroads; buildings; bridges; tunnels; highways; dams and especially those people who lose their lives working underground in mines, digging and drilling for billions and billions worth of dollars of riches that never get to hover anywhere around their dinner tables.” Masikela’s latter sentiments perhaps sum up the frustrations of miners at Lonmin’s Marikana at the realization that the spoils borne out of their backbreaking sweat “never get to hover anywhere around their own dinner tables”.

The rattling of assault rifles and massacre, some say tragedy, which became apparent as the dust settled shocked the Republic and the world in general. How could this happen in former President Mandela’s “Rainbow Nation”? But many of us would readily admit that South Africa has been anything but a “Rainbow Nation”. If ever it was, it was cosmetic and the bloodbath on August 16 washed off the niceties and gave us the most spotless mirror so we could have the clearest look at the state of our nation, a nation so ravaged by racially characterized inequalities yet seemingly content with paying lip service to what may plunge the country into utter chaos.

The unfortunate and probably avoidable happenings at Marikana are indicative of the ever-growing distance between union leaders and the constituencies they represent, or at least ought to represent. The miners had lost faith in their leadership’s ability to represent their interests and chose to go at it alone and the fact that the Lomnin management was accused of luring other workers in secret didn’t help matters at all. This trend is also found in the political terrain. How else would you explain the almost-daily “service delivery protests”, a term used to hide much of the citizenry’s angst and frustrations with a government whose world class policies are consistently betrayed by a lack of political will or incapacity of designated personnel to implement the said policies and yet salaries for those functions are claimed in full without hesitance.

Although the scores of the workers who went on the illegal strike are far from being angels in this sordid affair, their grievance are understandable. It doesn’t make any sense that the workhorses of the mine operation chain take home a reported R4000 after deductions, while the outgoing chief executive officer, Ian Farmer, is said to have earned something in the region of R29 million in 2010. How is this obscene disparity justifiable? It’s true that the job of a chief executive requires specialized skill and that if you asked a rock driller to perform those functions; he is likely to be overwhelmed by the occasion. The opposite may not be true but the most important question is: who grows up with the ambitions of being a rock driller? Chances are people dream of better. Does the fact that a rock driller can be easily replaced, unlike a CEO, mean that their standard of living ought to be sacrificed at the altar of management and shareholder’s avaricious tendencies? The effortlessness with which rock drillers are sourced is tied to the unrealized socio-economic right of (credible) education. Education is an instrument of social and economic advancement and should the country’s educational produce continue in its trajectory, then we may have many more African people being condemned to eking out a living in the dark and dangerous depths of our land since it’s they who are always short changed by public schooling system upon which they depend.

It’s a given that Lonmin’s first priority is to deliver profits otherwise they wouldn’t be in business but surely the people who do the dirty work(pun intended) must be seen to be appreciated because their performance is inextricably linked to the exorbitant salaries executives took home. The mere fact that a person’s occupation is that of consequence and not necessarily as a result of an actively chosen career doesn’t, or rather shouldn’t, at all make such a person disposable. The inability, if not refusal, to offer a living wage to employees all but reduces them to dehumanized being. It’s these kinds of conditions that lead to aggrieved workers eliminating everyone who is perceived as a threat to their cause and we’ve seen this with police officers and security personnel who were brutally murdered in the days preceding the bloodbath on that Thursday afternoon. We also saw this during that inhumane 2006 security sector strike, where people who exercised their right not to participate in the industrial action were thrown off moving trains. Such conduct is indefensible but we’d be naive to think that mere condemnations would stop those deplorable actions given our country’s inclination for violent and aggressive behaviour.

Perhaps Marikana represents a tipping point for South Africa’s employer/employee relations and how the government ensures that everyone keeps their end of labour agreements. It cannot be that 44 lives are lost in what could have been an avoidable situation. Since the mining sector is the cornerstone upon which the country was built and, largely, still relies on, it’s critical that the mineral resources keeps mining corporations on their toes as far as fulfilling their social labour and sustainability duties as per mining license conditions. Unions must remind their members that industrial action isn’t open season for them to slaughter those may hold contradicting views regardless of the nobility of their demands. Marikana mirrors the ugliness of our inequalities. We’ve seemingly forgotten the “more human face” Biko sought for us.